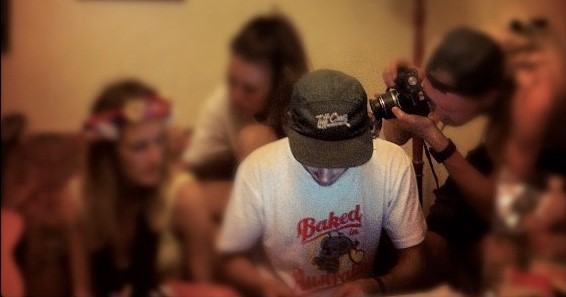 Silly Pear, a.k.a Charlie Nivison, is a Sydney-based artist whose artworks are bold, playful, and colourful. Growing up in a creative household in northwest NSW and studying graphic design in Canberra, Nivison is strongly inspired by music, movies and pop culture. His works have a strong use of colour and appropriate comic book characters for graphic effect; they’re vivid, engaging, and powerful.

Nivison’s process is concept driven and typically begins with working by hand before being completed digitally. As he says, ‘I’ll usually just have an idea or see something that sparks a concept. I then sketch this out ’til I think it’s ready to either draw up onto an object or canvas, or I’ll scan it into my computer and start digitally sketching it up ’til I’m happy with it.’

An obsessive surfer, Nivison would like to ‘paint more murals and public art (as well as) get some bigger barrels!’. In the meantime, however, when he isn’t creating artworks or illustrations he works as a screen printer, predominantly printing bold and graphic illustration and type work upon t-shirts.

You can contact Charlie and see more of his work via:

This site uses Akismet to reduce spam. Learn how your comment data is processed.